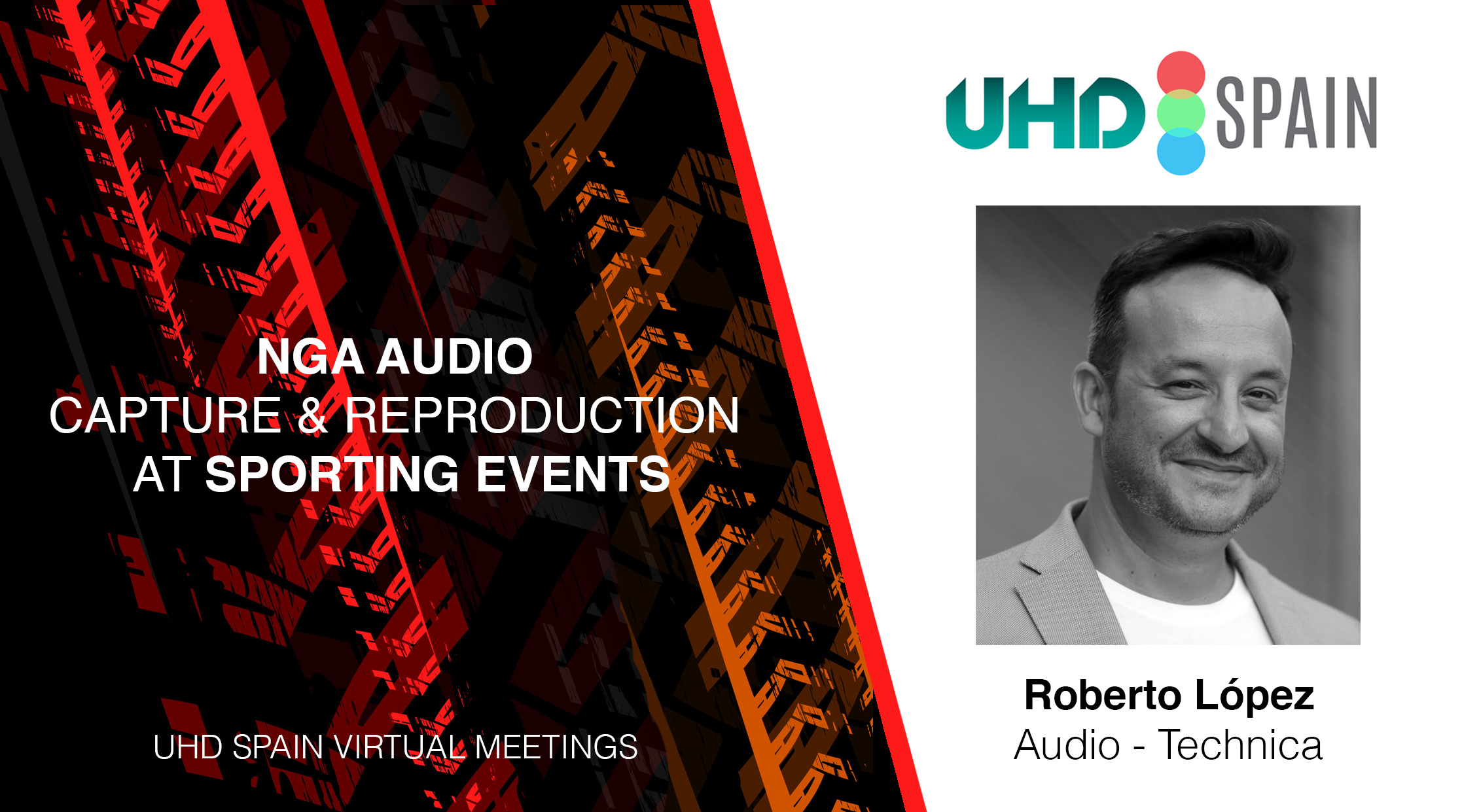 The virtual meeting restricted to members of the association, was led by Roberto López from Audio-Technica.

UHD Spain hosted last month a new virtual meeting attended by about forty members of the association and led by Roberto López, from Audio-Technica, a sound engineer with 25 years of experience in the Broadcast market, a specialist in post-production systems, and certified instructor for Avid, Avid ACSR.

López began the presentation and the debate by informing that Audio-Technica “is currently developing microphones for microphonic pick-up at large sporting events and focusing on providing more quality and quantity of data”, highlighting the work being done in the field of MotoGP.

With regard to its application in this area, López pointed out that it is working especially on “creating a third dimension, the height, thus providing greater realism and interactivity for the listener”. These advances, according to the engineer, will allow the user to “choose a certain mix or modify the volumes as soon as NGA’s contribution allows us to do so… the advances will go in this direction”.

The specialist pointed out, however, that it will be the engineers who will allow the user to use one or other tools and that “we as manufacturers provide new equipment so that the amount of information that reaches the studio is used by the engineer to be able to be creative with any type of sound”.

“What we try, in collaboration with Dorna Sports, is to provide as much information as possible by placing microphones where there were never before, for example in the corners or on bikes and suits, always with the permission of the teams and riders, so that the engineer can create more creative and realistic mixes”.

The capture and reproduction of NGA audio have opened up another debate as to whether the sound that is developed will be similar to the sound that the user finally hears at home. In this case, and given that the end consumer will not have state-of-the-art equipment, the focus is still on “developing flat mixes” so that the listener can “hear it well wherever they are”.

Issues such as the correct use and respect of loudness laws like R128 were also discussed.

The attendees also gave their opinion on the development of HRTF technology, which allows for positional audio that varies depending on the person, as it is a relationship between the pinna, chest, and head.

It was made clear that the ‘hrtf’ (head-related transfer function) of each individual person would be needed to develop a quality and personalized surround sound, something that the attendees described as “very complicated”. Related to this was the concept of Head Tracking and the use cases where its application might make the most sense.

The purism of sound versus the way in which new generations receive it (mostly via mobile phones) was another of the topics discussed, and the difficult balance between wanting to achieve perfect sound and the reality of everyday use was debated.

Despite the diversity of opinions, the conclusion was that the most relevant aspect of this new sound is the capacity for interaction that it will provide to the user.

This initiative of the non-profit association UHD Spain consists of meetings of its members with experts from the audiovisual sector and responds to the commitment to promote Ultra High Definition in Spain, at all levels: both for consumers and professionals.

For the second year in a row, from 14 to 18 November, UHD Spain will be part of the 4K HDR Summit, at the National Digital Content Pole in Malaga. Monday 14 November, coinciding with the opening day of the eighth edition of the event, will serve as an on-site meeting to welcome new members and collaborators of the association. In addition, all the activities carried out by the different working groups (capture, post-production, encoding, broadcasting, reception, and audio) will be presented and the second edition of the White Book on UHD in Spain will be released.

Among the founding partners is the Universidad Politécnica de Madrid, in particular with professors and researchers from the E.T.S. de Ingenieros de Telecomunicación who have been working on UHD issues since 2015 through the RTVE Chair at the UPM.

It should be noted that only five countries in Europe have professional associations on Ultra High Definition: Germany, France, the United Kingdom, Italy, and Spain.