The Qatar World Cup is just around the corner and little by little the different platforms are preparing to offer users all the matches, or at least a good part of them. We already knew about the creation of a dedicated channel such as Gol Mundial and later we uploaded that RTVE will broadcast the matches in 4K HDR on DTT in the same way as Movistar.

However, despite the publication of the news, there were still many doubts that remained to be cleared up and which RTVE has clarified for us. For example, on which DTT channel would it be possible to watch 4K content, as TVE only has HD resolution channels. In the end, matches in 4K HDR can be seen on TVE UHD, a channel that you can tune in following these steps.

How to tune TVE UHD

UHD Spain was a breath of fresh air for Digital Terrestrial Television (DTT) in Spain. A platform that offers two channels with broadcasts that take advantage of Ultra High Definition via DTT in both SDR and HDR, which is the one we are interested in.

UHD Spain will be called TVE UHD for the duration of the World Cup. A channel that uses the Digital Multiplex (also called MUX or multiplexor) that TVE used before and that takes advantage of the HDR (high dynamic range) image mode.

How can I tune in to TVE UHD if I don’t have it yet? For months now, users who have been researching the DTT video signals in Spain have been able to access these channels.

Simply start automatic or manual tuning on your TV to find these channels. If you want more practicality, I recommend that you do the manual tuning, looking for the channel that corresponds to your province. 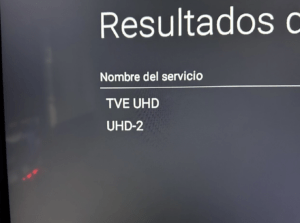 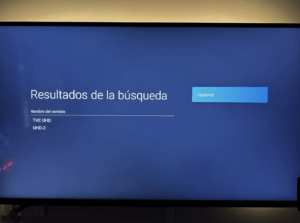 Depending on your location, the channel varies, so there is a list with the dial you have to search for on the UHD Spain website.

In order to be able to use the 4K format with HDR, this channel uses the HEVC H.265 codec, which is used by the DVB-T2 standard and which does not require a high bandwidth consumption.

As we have already mentioned, among the requirements for watching World Cup football in 4K, the TV must be compatible with 4K resolution and have a DVB-T2 tuner, a component that has been present in all TVs since 2016.

RTVE will include all the matches played by Spain, 10 matches in the group stage, 4 in the round of 16, 2 in the quarter-finals, the 2 semi-finals and the final. It will also offer the match for third place, in the event that Spain plays it.

The Spain-Japan match was screened experimentally in a cinema in Madrid in Ultra High Definition (UHD), with High Dynamic Range (HDR) and Dolby Atmos sound. Among the 200 guests and experts at this historic event was...
18/11/2022

Antonio Fernández-Paniagua, Deputy Director of Planning and Management of the Radioelectric Spectrum confirms that “experimental broadcasts in UHD have been authorized in practically all the provincial...
31/10/2022

Francisco de la Torre, Mayor of Malaga, will inaugurate the eighth edition of the international 4K HDR Summit Pere Vila, President of UHD Spain, states that he feels “very proud of what we are doing and the result...